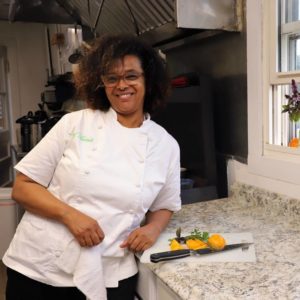 Ms. Crockett, the Executive Chef, and Manager at the Hope & Glory Inn and Vineyard was born in Addis Ababa, Ethiopia, and was educated in French schools. She is a graduate of the Auguste Escoffier School of Culinary Arts. Fluent in five languages, it is not uncommon for her to speak Italian, French, and German when recommending wines from those countries. She is also known to the producers of the Food Network, having hosted them for dinner at the Hope and Glory Inn!

In 2018, she was invited to New York to attend a Food Network Cooking School event for Chef Marcus Samuelsson. Last year, Samuelsson was the honoree at the James Beard Foundation’s Chefs & Champagne event. He joined a list of predecessors including Martha Stewart, Thomas Keller, Daniel Boulud, Wolfgang Puck, Bobby Flay, Emeril Lagasse, and more. Chef Crockett is also known to celebrity Chef Tom Colicchio, a five-time James Beard Award winner and a guest of the Hope and Glory Inn!